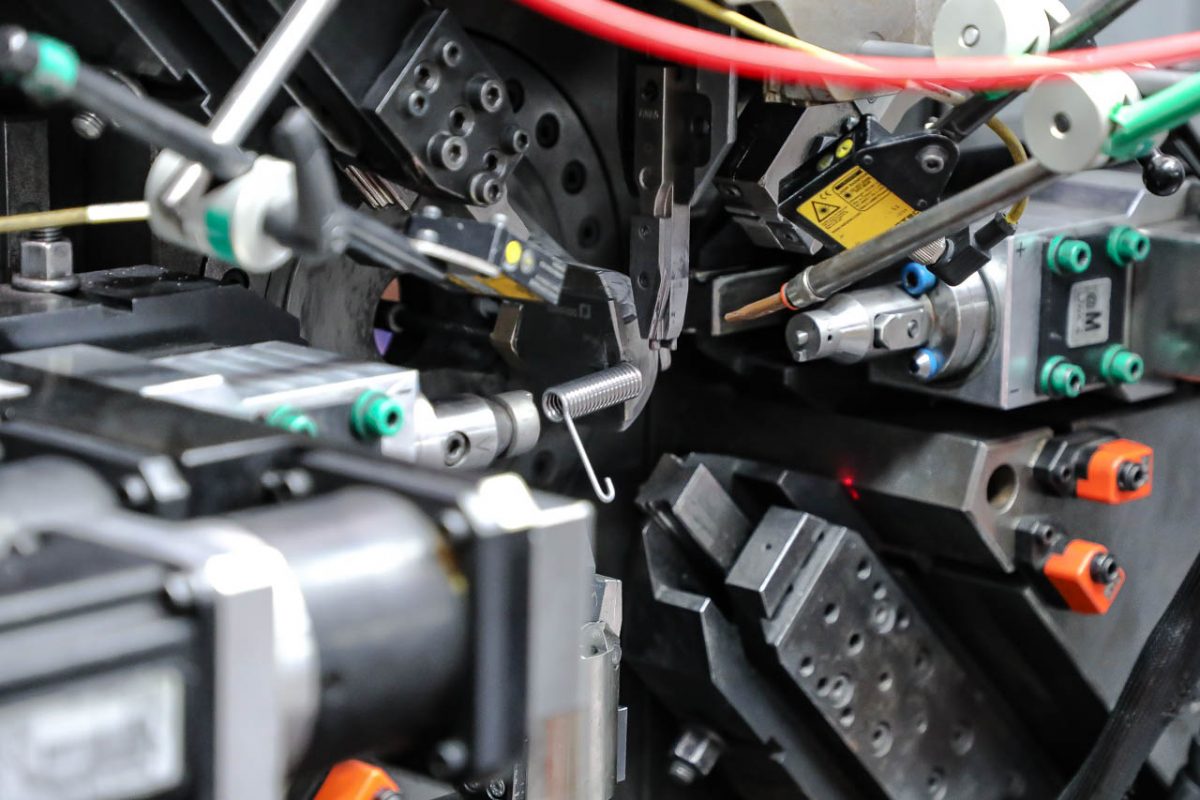 SPRING PRODUCTION: WHY DO WE USE WAFIOS MACHINES?

When we say “springs”, the first thing that comes to mind are compression springs with coiled wire. In truth springs are much more than this, it would be more appropriate to speak of elastic components, to embrace the whole range of elements whose main functionality is elasticity (energy storage and return).

Whenever a component is required to withstand / support stress and return a compensating force, it can be called a spring.

Spring manufacturing involves a purely technical dual aspect, firstly the set of mechanical know-how and materials involved in the project phase and to follow the manufacturing phase, which transforms the wire into a physical object.

The latter area typically involves machinery for an industrial production, achieving the best possible productivity in respect of the customer’s requirements.

The sector of machinery for spring manufacturing represents a niche in the market of machine tools, has a high level of specialization and is one of the sectors that has been mostly influenced by electronics before and digitalization now.

The segment of machines that the insiders call Spring Formers, has experienced over the last 25 years, the transition from traditional manufacturing, strongly determined by the inspiration of the operator, to a completely automated phase where the operator has become a programmer.

As mentioned previously, a spring manufacturing machine must guarantee the highest production rate possible, respecting the tolerances required, making dimensional repeatability the paradigm of the machine itself.

In summary, fast, accurate and easy to program.

For this reason, Mollificio Valli, over the course of its more than fifty-year history, has always tried to be a promoter of innovation by purchasing and installing production machinery identified as the best available on the market. Wafios machines certainly represent an excellence in this sector.

Wafios: a story that spans the centuries

It was over a century when Ernst Wagner started building machines to transform steel wire in his workshop near Stuttgart. It was 1893.

In the following years together with the partners Ficker and O. Schmid he gave birth to the company WA.FI.O.S., name which bears two letters from each of the founders name.

Starting in the 1990s, Wafios was the first manufacturer in the world to introduce the automation of multi-slide machines, replacing the mechanical movement with the electric drive with brushless motors.

Mollificio Valli has purchased the first three Wafios Spring Formers FMU series in the 1990s, and since then has continued to increase its machine range, integrating it and / or replacing it with increasingly updated and performing models.

The project philosophy of FMU series machines, has kept electronic automation as a common denominator in a programmable logic, improving productivity over the years by reducing the process variability and adding new manufacturing possibilities, both for type of product and for process specificities.

After more than 20 years, at Mollificio Valli there is an entire department dedicated to the production of springs in shaped wire, with 9 machines of the FMU series, the latest one arrived in 2021. The production capacity exceeds 100 million springs per year.

The investment is economically significant, but it is repaid with production performance above average, with reduced tooling times, maintenance of process capacity indexes exceeding the minimum requirements and the possibility to check 100% optically every single piece produced, already during the coiling process.

We believe that Wafios machines are a highlight that has allowed Mollificio Valli to become over the years, one of the major spring manufacturers in Italy and a reference point for multinational companies that use springs and have chosen us as a partner for the development of their products. Our customers operate in the most varied sectors (automotive, electro-mechanical, thermo-hydraulic appliances, cosmetics).

We have taken on the most demanding requirements our customers ask for. 0 ppm strategies, capacity process greater than 1.67 and food contact cleaning, are concepts that we have already successfully implemented. Good investments give good returns, and our revenue is the reputation we have built over the years, also thanks to Wafios machines. This allows us to look confidently towards the future, focusing on competence and innovation, which are the objectives common to Mollificio Valli and Wafios. Improving to grow and collecting the challenges of transition.