Novara Chamber of Commerce recently awarded the 2009 prize “Novara che lavora e produce” (Novara working and producing), which has reached this year its 57th edition and which aims to acknowledge the work and contributions made by local workers and enterprises to the development of the provincial economy.

The Italian Deputy Minister for the Economy and Finances, Giuseppe Vegas, the Regional Councillor for Tourism, Giuliana Manica, and the President of Novara Provincial Council,Diego Sozzani, took the floor during the event that culminated with the prize-giving ceremony.

The spring manufacturing company Mollificio Valli was represented by its employees Ornella(left picture) and Ermanno (right picture), who were both awarded a gold medal for their 33 years of seniority and 34 years of seniority, respectively. Ornella and Ermanno were congratulated by the owners of Mollificio Valli and by all of us, their colleagues, who look forward to a continued, fruitful cooperation. 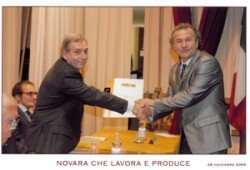 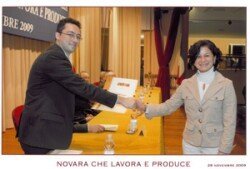 During the 2009 prize-giving ceremony, the following prizes were awarded:

– 101 gold medals in the category of workers that have served in the same company or several companies operating in the Province of Novara in the various economic sectors for a minimum of 30 years, at least 20 of which in the same company;

– 1 gold medal in the category of executives that have served in the same company or in several companies operating in the Province of Novara in the various economic sectors for a minimum of 30 years, at least 15 of which in the same company;

– 29 gold medals in the category of companies operating in the province in the various economic sectors boasting a minimum of 30 years of uninterrupted activity, at least 20 of which in the province of Novara;

– 1 silver plate in the category of the enterprises of the province of Novara that have positively contributed to the province’s economic development and that have stood out, in particular, for:

– the development of patents or new products;

– the transfer of technologies and the development of innovative products or processes;

– the implementation of social responsibility initiatives, including  quality and/or environmental certifications.

– 1 gold medal to the “female enterprise of the year”, which distinguished itself in particular in 2009.