The Virtualization system has been modified and at present Mollificio Valli is using Citrix XenServer. The version we have purchased is the Advanced one which includes both Live Migration and HA. The 3 Dell R510 servers run the virtual machines saved on SAN via iSCSI with MultiPath I/O. MultiPath allows to add the connection speed of the single iSCSI interfaces of 1 Gb/s (100 MB/s). At Mollificio Valli, each server has 6 NIC for the iSCSI traffic on SAN disks with a total performance of nearly 6 Gb/s (600 MB/s).

The Storage system has been modified and at present Mollificio Valli is using Open-E DSS. The 2 Dell R515 servers house the virtual machines published via iSCSI with MiltiPath I/O. Multipath allows to add the speed connection of the single iSCSI interfaces of 1 Gb/s (100 MB/s). At Mollificio Valli, each server has 12 NIC configured as bond (balance-alb) in groups of 2 for a total of 6 NIC for the iSCSI traffic. The bond balance-alb configuration (supported by Linux driver of Intel cards) allows to have single interfaces of 2 Gb/s. OpenE DSS software has a configuration in Active-Passive modality; the two machines show LUN via Virtual-IP and, in case of problems to the primary node, the secondary one assumes control (thus becoming an active node). Once the problem has been solved, the primary node starts the copy of the blocks on the disks and after that it becomes an active node. The total available space on the disk is 3,3 TB, configured as RAID-0 software (Open-E DSS) on 3 array RAID-10 hardware (DELL PERC H700). 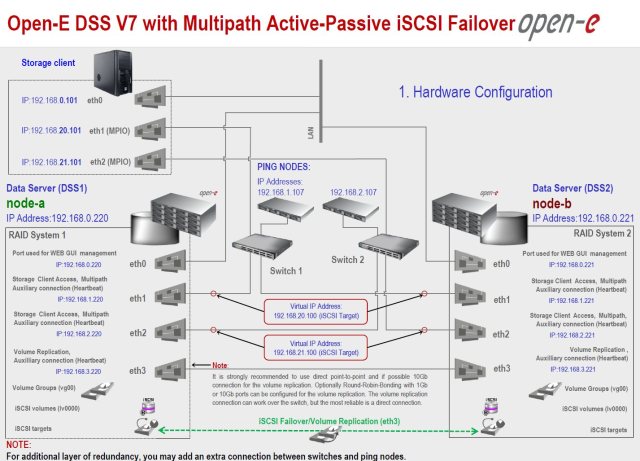